Download File
Aspects of Work
​One piano, four hands    24’    2014
First performance by Julian Jacobson and Mariko Brown at the Manchester Art Gallery, 20 October 2016
The piano duet was the medium by which most concert music in the nineteenth century was disseminated: two persons at one piano was a fashionable entertainment and I wanted to create some 'symphonic parlour music' in this piece. It evolved around the important painting “Work” by Ford Madox Brown (1865). This compresses the activities of a cross-section of Victorian society into a portrait of a London street scene populated by folk engaged in occupations of many different sorts. Its central focus is the digging of a hole which recalls the construction - by hand - of Bazalgette’s sewers or the first underground railways, and the immense industry of the Victorian age in general. (How many shovel-fulls of soil were displaced, and how many bricks laid during the course of the nineteenth century!) This toil clearly has consequences for those caught up in it but the picture also hints at the enormous impact that productive labour can have on society at large and for generations to come. ‘Aspects of Work' is a tapestry spun over a traditional four movement structure - allegro, scherzo, adagio and fugue; it zooms in and out on figures in the painting while illustrating (1) the energy of the labourers and the growth of industry, (2) the characters in the painting, and the skills and beauties of the Aesthetic movement, (3) the tragedy of the deprivation which was ever present, but with a growing social conscience also, and (4) the vision of the ‘brainworkers’ which planned and oversaw great infrastructure projects and the money of the powerful which paid for them.

Four ideas for two oboes
Oboe duet    11’    2013
Together, these short pieces make up a Sonatina of moderate difficulty
More or Less?
​Oboe, Piano        6’        2011
Laugh Out Loud
​Clarinet, Piano        4’        2011
Music for Four Bassoons
​4 Bassoons        7’        2010
Sonata for Strings “Stillleben”
2 string quartets + double bass        11’        2013
​First performance for dance by Ace Dance Company, June 2014 at Arlington Arts Centre, Newbury. Choreography by Laura Kelleher.
Although this piece has the same underlying tempo throughout, it falls into two sections, the first of which is static and peaceful with gradually evolving harmonies. The second springs to life with dynamic rhythms and melodic fragments, while the harmonic shifts bring with them a kaleidoscopic shuffle of ideas. Hence Stillleben, (‘Still Life’). It was originally intended for an ensemble of players touring in Scotland and I wove folk-like fragments of melodies into the fabric which reappear from time to time. Each half of the piece has 12 short sections each in a different ‘key’, and the second half journeys back through these 12 keys all over again.
Short Story
​Flute, Viola, Harp        13’        2011
This work, written for Trio Sospiroso in 2011, presents itself as a patchwork of individual, contrasting episodes and as the piece develops these contrasts become greater; there is a narrative linking them, however, and it was as if to emphasise this that I called the piece "Short Story". It concerns a 'progress' of harmony. At the start, harmony is merely implied in the melodies of viola and flute then, as the harp picks out skeletal chords, it assumes a subservient, accompanying role. By the central section of the piece the melodies have taken wing and the harp accompaniment is a tour-de-force: the players are combining together each in their own way. The finale sees the triumph of harmony as a sensual attraction in its own right; the harp is crowned victorious while the flute and viola imitate with scurrying arpeggios. 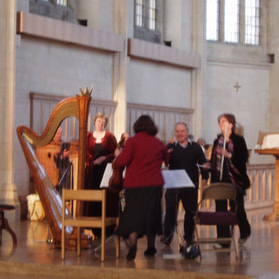 Speed Matters
​Violin, Harp        5’        2008
First performance by Frances Mason & Jenny Broome in The Radcliffe Centre, Buckingham as part of the Buckingham Summer Festival, July 2008Commissioned with funds made available by Holywell Music
Recorded live by Frances Mason (violin) and Jenny Broome (harp) at South Hill Park Arts Centre, Bracknell, February 2010
Trio Sonata in D major
Horn, Double Bass, Piano        10’        2007
​First performance by Matthew Bright (trumpet), Katie Long, Edward Lambert in Burghclere Church, Newbury, June 2007
Concerto Cubico
Horn (or trombone), Marimba, Harp        16’        2006
​First performance by Michael Buchanan, Rosemary Toll & Jenny Broome in St Nicolas' Church, Newbury, June 2006
Recorded live by Nik Kershaw (trombone), Andy Spicely (percussion), Jenny Broome (harp) South Park Arts Centre, Bracknell, 2010
…du baroque
2 clar, 2 bsn, 2 tpt, trbn, timps, piano        6’        2004
"...it lacked coherent melody, was unsparing in dissonances, constantly changed key and metre, and speedily ran through every compositional device."
​Anonymous letter to a French jourmal in 1734 complaining of music by Rameau which was described as 'du barocque'.
[Baroque music is] ‘rough’music - which aims to surprise by the boldness of its sounds and passes for song while pulsating with speed and noise.
English journal of 1738
A baroque music is that in which the harmony is confused, charged with modulations and dissonances, the melody is harsh and little natural, the intonation difficult, and the movement constrained.
Rousseau 1768
According to Grove Music, the term ‘Baroque’ is derived from the Portuguese barroco, meaning a pearl of irregular or bulbous shape. In describing a style of art it was therefore originally intended as a term of abuse. While writing this piece, I wondered what it was that the above commentators of the eighteenth century were complaining of, and set about to explore some characteristics of baroque music: such as (1) a continuo part which launches out and does its own thing from time to time; (2) ideas that are elaborated and ornamented, but not developed in a dramatic way; (3) use of repetition to form a structure.
Symphony of Joys and of Sorrows
for orchestra        17’        2000
​2 fl, 2 ob, 2 clar, 2 bsn,
2 tpt, 2 hn, 2 tbn, timp
vln 1&2, vla, cello, cb
String Quartet no 3 “Triptych”
19’        2000
3 movements - Melancholy, The Scream, Dance of Life
Triptych was written in January & February 2000. It interprets three paintings by Edvard Munch which give their titles to the three movements. In Melancholy the music attempts to capture the pervading mood created by the background of sea, sky and rocks into which the subject seems to blend and from which very little activity emerges. In The Scream the music explores the overwhelming beauty of the sunset by means of an out-of-focus harmony and contrasts this with the growing dissonance felt by the contorted figure viewing it all. In The Dance of Life the three main character types are represented by dances bound together in a constant frenzy: 'youthful innocence' is cast as a folk-dance, 'envy' by a Danse Macabre and 'sensualtity' by a Dance of Ecstasy.  The three movements should be performed without a break.
Recording by James Toll & Guy Button (violins), Asher Zaccardelli (viola), Jonathan Rees (cello)
String Quartet no 2
​17’        1999
Recorded by James Toll & Guy Button (violins), Asher Zaccardelli (viola), Jonathan Rees (cello)
Opening Chapters
Concert overture for orchestra        11’        1997
​3 Fl/picc, 3 ob/ca, 3 clar/bass, cl 3 bsn
4 tpt, 4 horn, 3 trombone, 1 tuba
3 percussionists
Strings
Chamber Concerto
13 instruments        15’        1983
First performed by Lontano conducted by Odaline de la Martinez in the Pump Room, Bath on 26 May 1984 as part of the Bath Festival

I do not remember a more consistently gripping concert of modern chamber music than the one given by Lontano under Odaline de la Martinez in the Pump Room during the opening weekend of the festival...
David Cairns in the Sunday Times 10/6/84
Each of the pieces presented here was a kind of musical landscape, prolific with flora and fauna, but often specific in the patterns that emerged, sometimes boldly, sometimes unobtrusively into the foreground ...among these tough compositions, Edward Lambert’s Chamber Concerto appeared most approachable, with mainly conventional ideas being used to generate excitement from the sheer virtuosity of the ensemble. There was no descent into the cliche common among so many contemporary concertos for orchestra. Interposed among the passages of thematic decoration here were episodes when the ensemble coincided in statements, in octaves, or finally, Stravinskian dance rhythms. Here, above all, in this concert, the playing of the Lontano team was superbly coordinated and gripping.
Meirion Bowen in the Guardian 28/5/84
Edward Lambert’s Chamber Concerto, a new piece, with its mangled trumpet-and-drum fanfares and violent conflicts between striding unison lines for strings and wind was strikingly imagined and very well played.
​Nicholas Kenyon in The Times 28/5/84
Piano Quartet: Emplay
Violin, Viola, Cello, Piano        11’        1983
Performed and recorded by Lorna Osbon (violin) Stefanie Heichelheim (viola) Simon Fryer (cello) with Edward Lambert (piano)

As a fitting memorial to Humphrey Searle, who pioneered 12-note technique in this country and helped to promote new music throughout his life, New Ensemble staged the Humphrey Searle Chamber Music Competition finals at the Purcell Room on Tuesday night in the context of Searle's own work. Four works were chosen for the final stage of the competition and these were performed in the first half of the concert before the jury, which deliberated quickly in the interval so that the winning work could be announced and repeated in the second half of the programme. This turned out to be Edward Lambert's piano quartet "Emplay" which certainly presented in its reworking of ideas from Brahm's Piano Quartet Op. 60 some of the most inventively-textured and syntactically original music of the evening.
​Anthony Payne in the Daily Telegraph 28/4/83
Invention
Violin, Piano        6’        1978
​for Jonathan Burrows & the Royal Ballet Choreographic Workshop
performed by Stuart Deeks (violin) and Edward Lambert (piano)
Fantasy Trio
Clarinet, Violin, Cello        12’        1977
​Performed at the St Bartholomew's International Festival of 20th Century Music, London, July 1978 by the Park Lane Players: Edward Pillinger (clarinet), Beverley Davison (violin), Christopher van Kampen (cello)
Suite for Lute
1977
​written for & performed by Lavinia Snelling at the Lute Society
Canzonetta
Clarinet, Piano        4’        1977
​performed by David Campbell and Andrew Ball at SPNM concert at the Guildhall School of Music
Duo for Violin & Cello
2’        1977
score lost
String Quartet no 1
​22’        1977
first performance by the Locrian String Quartet at the Christ's Hospital Arts Centre, Horsham 1978(?)